Winter is not the end of the "growing season."  It's just a different kind of growing.

The plum thickets, for example, have a lot to say about LIFE.

Twenty years ago we planted two kinds of native plums in the riparian buffer along McDowell Creek, American Plums and Sandhill Plums. 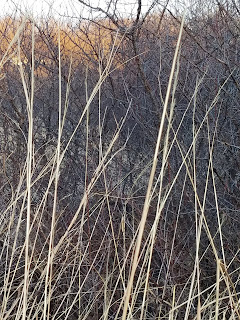 Now they have formed thickets. 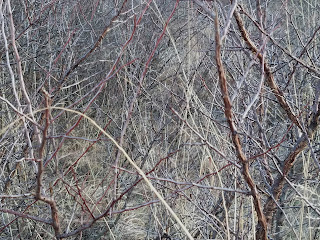 Birds newly arrived from the tundra are drawn to the plums.


There are Harris's Sparrows: 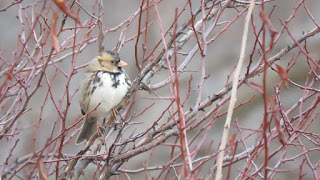 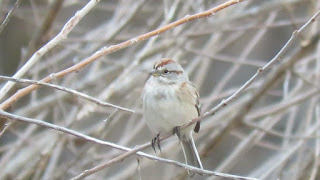 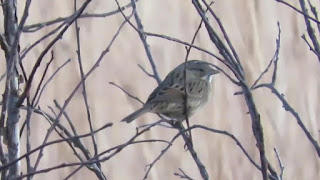 And a Song Sparrow: 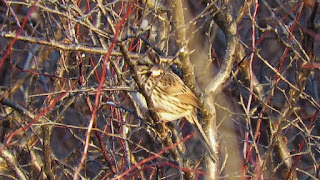 For all these birds the thickets provide protection from the cold--
and from predators.

For example, this female Merlin is sitting above the thicket, waiting for a sparrow to venture out.   (Thank you to Tom Ewert for confirming the ID.) 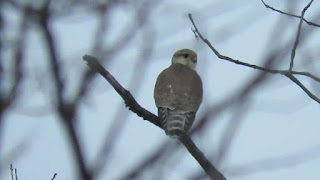 She would love to grab a sparrow-meal!

But if she succeeds occasionally, the remaining sparrows are still numerous.  As night falls they crowd into the thickets and strike up quite a chorus of cheeps and whistles.  The long whistles are coming from the Harris's Sparrows.    But all the species are chiming in!

Overwintering sparrows
settle in to roost in this thicket of American Plums.
These plums were planted by our neighbor, Al Alspach.
To me these vocalizations are among the loveliest and most touching sounds of a winter dusk.


Many thanks to Tom Ewert for confirming bird identifications!   All photos and videos are by Margy Stewart and were taken in the Creek Field, a bottomland prairie restoration along McDowell Creek, at Bird Runner Wildlife Refuge, in Geary County, Kansas, December 2019-January 2020.

Posted by Margy Stewart at 6:46 PM