Restoring Bottomland Prairie: After the Burn, May 2016

Last year, I struggled for weeks to identify this beautiful yellow flower that volunteered in the Field Buffer along the driveway.  Once I learned what it was, and that it was out of its western-Kansas home range, I wasn't sure it would make it here.  Would it survive a Flint Hills burn and our wetter climate?   I told it, "If you come back next year, I'll remember you.  I'll know who you are next time.  I'll greet you by name!"

What should I see this week but its sunny face!

So...
Hello, Cutleaf Daisy!  Welcome back!


I was not so happy to see something else in the Road Field Buffer--Yellow Sweet Clover, a native of Eurasia.   It out-competes other species in colonizing open ground, so it can be a problem in restorations.

It looked as if it had formed a compact colony already--I thought I could spot-spray it without collateral damage.

But then I detected native plants interspersed with the clover.

One of them was Canada Milkvetch!

Canada Milkvetch was in our seedmix for the Creek Field, but not for the Road Field Buffer.  The seeds had to travel quite a way to put their roots down here.
Yay, Canada Milkvetch!   You're a go-getter!

Also interspersed with the clover was the new leaf of a Compass Plant.

There's too much good stuff mixed in with the clover.  We need the native plants to hold whatever ground we reclaim from the invasives.


But as it turned out, I didn't need to spray at all. This wet, wet spring had dampened the soil to the point that I could pull the Sweet Clover right out of the ground, root & all!

Pretty soon I had liberated the native plants from their invasive neighbors.


And then, as a special treat,
I found a second Cutleaf Daisy!


Posted by Margy Stewart at 7:46 PM No comments:


The burn was excellent, removing the built-up thatch.


It temporarily exposed a  thriving metropolis, where so many creatures come and go!


Some of the holes are the air holes of pocket gophers, who almost never surface; others are the homes of creatures that run about on the earth as well as take refuge in it.


Some are back-up burrows for coyote parents who may need to move their babies in a hurry.  They may never be used, but smart coyotes (redundancy alert!) have them ready just in case.

Still others are the excavations of predators who have a taste for tunnel-dwellers!


At first, there's just a hint of green.

But overnight that green materializes into recognizable prairie plants.


Soon there is a field of clumps. 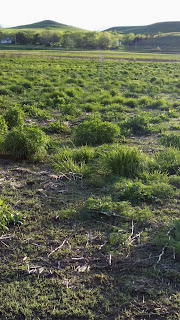 And note:  The clumps are set off by bare earth.

In other words, the Hedge Parsley is gone!

The carpet of invasives that had  covered the field has been incinerated.

Question:  Can an early spring burn control for Hedge Parsley?

Posted by Margy Stewart at 12:12 PM No comments:


The bad news is that I found Crown Vetch in the Creek Field!  The burn revealed it, a circle about 20 yards in diameter, bright green in color.   The fire had gone right over it.

I tried digging it up the minute I saw it, but the ground was hard, and the clods hurt my hands.  However, it rained that night and the next, and after that I was able to reach down into the earth and pull up roots and rhizomes.  I was so frantic to do it that I didn't think to take a photo until the vetch was all gone (at left).

I flagged the spot, so I could find it for re-checking.

I did re-check a week later and found several tiny sprouts, which I quickly dug up.

Where had the Crown Vetch come from?

At no point had a patch of Crown Vetch in the buffer simply expanded until it crossed the path that separates the buffer from the field.

However, seeds were another story.   Seeds could have been transported by wildlife or carried by wind or water.

And there was a seed source nearby--a patch of vetch on the buffer overlooking this part of the field.   Usually, land slopes down to a creek.  But Jerry Cameron, the previous owner, had thrown up a dike along this stretch of bank, so that the buffer sloped up.   Seeds on that spot could wash downward, toward the field.


Having been reconfigured by earth movers, the area was incredibly disturbed.   It used to be a Poison Hemlock forest, but after several years of control, it had become a Poison Hemlock savannah.   Large patches of Crown Vetch linked the toxic plants.


I started at the bottom of the dike and worked my way upward, clearing the vetch as I went.

Oh, how I thanked the rains that made the digging easy!


However, the disturbance of the soil meant rocks near the surface, rocks that sometimes gave my hands an unpleasant scrape.

While I was clearing the Crown Vetch, the Poison Hemlock was greening up.   The photo at left, upper righthand corner, shows at least six hemlock clumps.

I will work on them another day.

Meanwhile, clearing the vetch off the dike will hopefully stop Crown Vetch seed-pods from raining down on the Creek Field.

The good news is in the previous post, just below this one.


Posted by Margy Stewart at 1:47 PM No comments:

The good news was that some beautiful native plants emerged where I had removed the Crown Vetch from the Creek Buffer.

The Giant Hyssop at the left, the Wild Sweet William at the right, and the Canadian Wood- Nettle below would all love to form colonies of their own.   With the vetch pushed back, they can give it a try.

Note the fat cheeks on the Canadian Wood-Nettle!  Its cousin, the Stinging Nettle, has a longer, narrower leaf.

Both nettles are food plants for Red Admiral caterpillars.


Among the other shade-lovers in the reclaimed territory were Wild Violet, Golden Alexander, White Avens,  White Snakeroot,  Sanicle, and Pennycress.

The shade-loving White Snakeroot (left) will bloom in the late summer.

The unexplained corpse of an Ichneumon Wasp rests on the leaves.

The sweet new leaves of Sanicle appeared just days after I had dug up the Crown Vetch from this very spot.

You can still see the loose earth.

They say sanicles are healing herbs.

They seem willing to help heal our bottomland!

Some of the species rushing to fill the void left by the departed vetch were non-native, such as the Field Pennycress pictured below.

These species do not appear to push out other plants.

Of course, Canada Milkvetch can look very much like Crown Vetch when it first comes up.   I have to be careful that I don't remove a good guy when I'm after bad guys!  The closeup on the right shows the hairs on leaf & stem that distinguish Canada Milkvetch from Crown Vetch.

Posted by Margy Stewart at 4:41 PM No comments: