In 1999, we put in a riparian buffer along McDowell Creek.  We planted over a thousand bare-root seedlings that were part of the "wildlife bundle" we purchased from KSU's Forestry Department.   The flowering shrubs featured below--American Plums, Fragrant Sumac, and Chokecherries--were in that bundle.  But the same species also volunteer along the creek.  Over time the two groups have merged with each other as the banks and channels have changed and both creek and bottomground have rewritten themselves.

This year it came home to me how important these early-blooming shrubs are to pollinators.   What did the bottomground look like pre-settlement?  I don't know, but today these shrubs are an essential early-spring sweet spot for butterflies, flies, and bees.

Right at the Equinox the wild plums bloomed.  They sent the most delicate fragrance out onto the breeze--and the pollinators responded by moving toward them.

They weren't the only ones! I pulled a lawn chair into a thicket and just sat for a few moments.  The blossoms were alive with Red Admiral butterflies, feral Honey Bees, and flies.

The video above shows some of what I saw.  How I wish it could convey what I heard, and felt, and smelled as well--the rustling, the breeze, the fragrances, the fresh spring air...

A month later, the Fragrant Sumac bloomed.   So many butterflies!  The shrubs seemed to be blooming with butterflies, as well as with flowers.


The luscious yellow blossoms were covered with butterflies, as shown in the video below.  Most of the butterflies were Painted Ladies (Vanessa cardui) and American Ladies (Vanessa virginiensis), though two beautiful Common Buckeyes (Junonia coenia) also made an appearance, as well as an Eastern Tailed Blue.

Also appearing was a species of bee new to Bird Runner, or at least to my observations on Bird Runner.  It was a Mining Bee (genus Andrena).  Bees in the family Andrenidae nectar on early-blooming shrubs and gather pollen to provision their nests.  True to their name, they burrow in the ground, creating as many as 8 cells per burrow, with a pollen ball in each cell.  That's where they lay their eggs--one egg on each ball.   The newly hatched larvae eat the pollen until it's time to pupate.

Flowering shrubs, you are amazing!   Where do you stop and the insects around you begin?   You have roots, leaves, stems, branches, and flowers, but you also have all around you an aura of fluttering, special markings, and color.

The Monarchs Are Early. Where Are the Milkweeds?

Monarch butterflies hopped a strong south wind and arrived on McDowell Creek on April 8--a good month earlier than usual.

There was plenty for them to eat--both the wild plums and the lilacs were blooming profusely--but where would they lay their eggs?

The milkweeds weren't up yet.

The Monarchs floated here and there, just above the mustards and mints that were already leafing out--and it broke my heart to think that they were looking for milkweeds they would not find.

Still, the butterflies avoided the burns and replenished their energy with nectar.   I blessed the plums and lilacs and yes, the dandelions, that were keeping them alive.

Then on April 12, I saw milkweed noses poking through the soil. 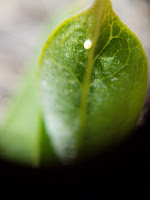 The milkweeds grew quickly, and soon I found little white spheres on the milkweeds' green leaves.


Within just a few days, the eggs became tiny caterpillars......with a healthy appetite! 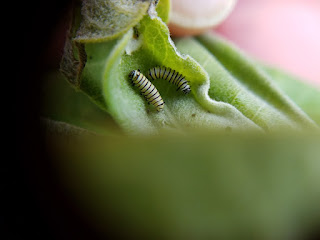 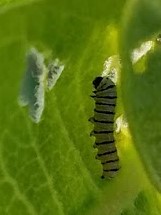 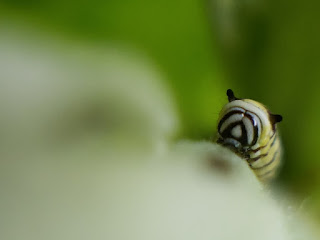 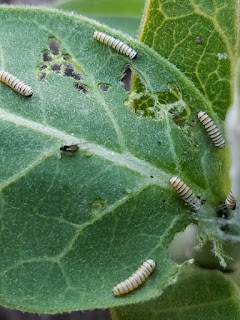 They need to grow quickly, because the milkweeds are home to spiders, too--and little caterpillars can make a nice meal for a spider.   Invertebrates don't seem to mind the toxic steroids called cardenolides which the Monarchs absorb from milkweeds.     Birds and rodents have learned to avoid the bitter-tasting Monarchs. But invertebrates such as spiders either have a different palate or a shorter memory.

I photographed these two spiders on the same milkweed plants where I found the caterpillars.  Some caterpillar-molecules will become spider-molecules. 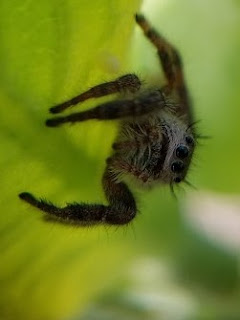 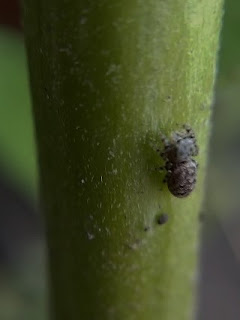 I pray with my heart that enough caterpillars will survive to found dynasties of butterflies!

I will pray with my hands and time and energy by working hard to create and maintain habitat for native plants, including milkweeds.

Posted by Margy Stewart at 6:04 PM No comments: