On Swamp Milkweed, The Wild-Joy Beetle!

Here, in the Cattail Wetland, on the effusive pink flowers of Swamp Milkweed, is a scarab beetle.

Scarab beetles are rich in lore.

The sacred beetle of the Egyptians was a scarab, as was, supposedly, the fictional "Gold Bug" of Poe's short story.

My little gem is named  "Dark Flower Beetle," or Euphoria sepulcralis.   Look at the linking of opposites in those names--"dark" & "flower," "euphoria" & "sepulchral"!

Natural selection has made flowers bright to attract pollinators; they are not "dark."   And what is euphoric about a sepulchre, or a tomb?

But the fusion of opposites is the stuff of myth, to say nothing of life itself.   Mystical experience--the apprehension of ultimate reality--is characterized by paradox: life and death, here and there, lost and saved.   It's never either-or.

The sacred Egyptian scarab was a dung beetle, while in more cultures than not, the carrion-eating vulture appears as angelic or divine.   Poe's Gold Bug was linked to both a skull--a death's head--and a fabulous treasure.

Somewhere at the paradoxical heart of life, "waste" is transformed into treasure, and the defunct do shape-change into life.  The lowest become highest and the last become first--a deep reality about which I, for one, am wildly joyful!

My mythogenetic beetle, feeding on pollen, is nowhere else but at the heart of life.


Posted by Margy Stewart at 3:23 PM No comments:

Finally!!!   Let it be known that on August 29, 2015, I finally found a Clouded Crimson caterpillar on a Gaura plant on the road right-of-way, next to our mailbox.   Shortly thereafter, I found a second, smaller caterpillar on a second plant a few feet away. 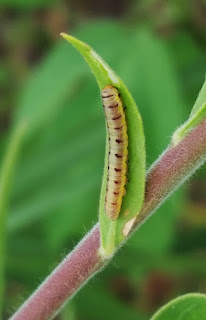 Excitedly, I started searching the Gaura plants along the Creek Field driveway.

Or is he the larva of a different species altogether?

Instead of hosting shorebirds, the "wetland" now hosts pollinators.


Every summer, I look for the pretty little larvae of the Clouded Crimson Moth, to be found on plants in the genus Gaura.

Last summer, I grew anxious because I couldn't find these delicate little green-and-black caterpillars.   I looked and looked--the first week in August,  the second,  the third--no caterpillars.

What I did see, were translucent little "flies," hovering around the Gaura blossoms.   I wondered what they were, but briefly, impatiently.   I wanted caterpillars.

Finally, at the beginning of September I found one Clouded Crimson caterpillar.   Later in the month I found 4 or 5 more--a paltry few!   The paucity was perhaps due to our parched summer--the third drought summer in a row.

This summer we've had regular rains & an explosion of Velvet Gaura, aka Gaura mollis.


I started my hunt for caterpillars as usual at the beginning of August.   There were those same "flies" again, perching & hovering, just like the year before.   This time they got my attention.   I learned they were "Stilt Bugs,"  not flies at all but true bugs in the family Berytidae.   Probably they are of the genus Jalysus, as Jalysus species can have a special affinity for plants in the Primrose family, such as Gaura.    Gaura affinity & Gaura fidelity--that's what my Stilt Bugs have!


These photos of Stilt Bugs were taken Aug. 10.

Now it is August 26, 2015, and still no Clouded Crimson larvae.   To make matters worse, the Stilt Bugs, which had been like a feathery cloud around the Gaura, are mostly gone.

But the Gaura leaves only appear to be empty.   Well camouflaged in their midst is the impressive caterpillar of the White-Lined Sphinx Moth!


I found a caterpillar, all right!

And he's a beauty!


Clouded Crimsons?  I am still waiting..

Posted by Margy Stewart at 11:21 PM No comments:

A Golden Garden Spider (Argiope sp.) decided to build a beautiful web behind the front seat of the "Bad Boy Buggy," the four-wheel-drive golf-cart that I drive around every day.

For several days we kept each other company.

One day our lab Deci, riding on the front seat with me, snapped at the spider.   The spider dodged, and Deci came up with a mouthful of web.   I scolded her.   I didn't want her, and through her, me, to be the cause of a wasteful death.    After that, Deci left our eight-legged passenger alone.
I called this spider "Charlotte."    She was of a species different from the one made famous by E. B. White in Charlotte's Web (his Charlotte is a Barn Spider, Araneus cavaticus).   But my spider made me ponder the same mystery White probes in his "children's" book.  (We are all children in the face of mystery!)  The mystery is the fact of predation--that we kill to live--combined with our feelings about it.  The fact takes on a mantle of mystery when it arrives hand-in-hand with our desire to be good, loyal, and kind--our desire to be reciprocally benevolent members of a community.

I have long held dear two visions of "community."

The first is the Christian goal of the "Beloved Community."

The second is the ecological construct of the "Land Community."

But are these two visions compatible?

The "Beloved Community," a term first coined by theologian Josiah Royce, was described by Martin Luther King, Jr. as the goal to which all people of good will should strive--a society without war, poverty, racism, or exploitation, a society endowed with spiritual riches surpassing its material possessions.

The "Land Community," made popular in Sand County Almanac by Aldo Leopold, is the foundational concept of  contemporary ecology.    In this view, nature's components--plants, animals, soils, stones, air, water--are in constant interaction with each other, creating a whole that affects the parts and vice versa.   We humans should not hold ourselves apart from this community but should take our place within it.    And our citizenship should be benevolent.   It is the well-being of the community  that determines the rightness or wrongness of human actions.  Thus, the Land Community gives rise to a Land Ethic:   Humans  have a chance to be part of a community and at the same time good.

Leopold certainly understood the importance of predation in an ecosystem--just look at his essay, "Thinking Like a Mountain," in which he bemoans the killing of wolves which led to overpopulation of deer and then over-browsing of vegetation.

But did he really explore the implications of predation for "community?"   Sometimes he wrote about the "land community" as if it were a liberal democracy--a place of universal rights and mutual respect--equal citizenship for all!

But what kind of "community" is it where some citizens are busy eating other citizens?

When I first saw my Charlotte on the buggy, she had a grasshopper in her web, already wrapped up and partially processed.   She busied herself around her web but frequently returned to her bundle for a little snack.   Because the grasshopper was already dead,  I could watch the spider with interest--I did not have to feel torn between a hungry predator and a frantic prey.

But the emotions of prey-empathy are always there, under the surface, ready to be tapped.   That's just what E. B. White does in Charlotte's Web.    Spring-pig Wilbur is scheduled to be slaughtered in the fall so humans can eat him.  Charlotte the spider, out of the sheer goodness of her heart, sets out to save him.   Her kindness finds an answering kindness in the heart of every reader, old or young.   Yes!!!   SAVE WILBUR!!

And yet Charlotte herself is a predator.   She makes Wilbur uncomfortable by describing the "deliciousness" of flies and how she "drinks" her prey.   "I love blood," she says.

Watching my Charlotte enjoy her lunch, I think about how she and her life are a metaphor for me and mine.

My husband and I are about to take delivery of half a hog.   By the time we see him, he will be in parts, wrapped up in paper and freezer-ready.

No one saved Bruce!

The only way not to feel bad about it is not to think.    But thinking is what we do.   We are Homo sapiens--not wise humans, but thinking humans.

E. B. White's "Charlotte" catches not only flies in her web but two aspects of our experience:  We live by killing but we hate slaughter.

So will we humans, in the midst of abundance, always feel some aversion for ourselves?   Some shame?

Charlotte!   You've taken me to Question-Land.    Now tell me:  Where do we cross the border into Answer-Land?

Posted by Margy Stewart at 5:32 PM No comments:

This Green Stink Bug looks purposeful! Here he is, crawling up a Wild Cucumber vine in the riparian buffer--a strip planted back to native between the Creek Field & McDowell Creek. He is a plant-feeder, and I am told he is a terrible pest on soybeans. However, I am also told that he actually perfers wild plants & only moves to crop fields when the wild plants run out. My wish for you, little guy: May your wild plants never run out!


Posted by Margy Stewart at 2:33 PM No comments:


How exciting it is to see perennials emerging in the Creek Field!

Eastern Gammagrass may have sent up leaves last year, but it didn't bloom.   This year it bloomed by the dozens!

Sawtooth Sunflower bloomed last year but the season was almost over before I learned to tell it apart from other sunflowers.   This year I'm doing better, learning to spot the tell-tale details of leaf & bract.   Now it leaps out at me, even from afar:  A kind of windblown appearance (as pictured in the photo below), even on a still day, as if always caught in a high wind.

Posted by Margy Stewart at 9:57 PM No comments: