I took this picture because I love the colors of thistle blossoms (each one of those "strings" is an individual flower, on its way to producing a seed).  Can there be anything more magical than that radiant blend of hot pink, cream, lavender, and rose?

Those colors lit up the field in early September!

But if you see a thistle, and you can't stand drama, better look the other way.

Where there's a pollen-filled thistle, there's a story--or maybe two, or three, or four....

I have spent most of my life with my nose in a book.  As a result, my real-world observational skills are just now beginning to develop.

Better observers would have noticed at once many of the stories in this thistle.

But I had to discover them slowly, step by step.

Yes, I noticed there was a soldier beetle in the center.  But I had to look closely to see that there were two beetles, and they were multitasking:  Ensuring a future generation of soldier beetles, and, in the male's case, mate-guarding, while snacking on thistle-pollen and keeping an eye out for unwary aphids or flies that might happen by.

And I saw the cucumber beetle buried in the florets, enjoying the smorgasbord as well.

But it wasn't until I stepped away from the thistle and magnified the photo on my phone that I noticed there was something else in the photo, something dark and rough in between the two thistles.


If a butterfly was feeding on that thistle, too, I wanted a better picture of it.


I hurried back to the thistle, and luckily, the butterfly was still there! 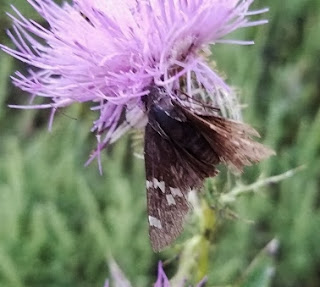 It looked like a Silver-spotted Skipper, or at least some skipper with white patches on its wings.   Its head was buried in the flowers.

But why wasn't it moving?

I touched it gently--no reaction.

This butterfly was not alive.

I know from experience that when insects appear in the open, in awkward, immobile positions, there's usually a spider involved. 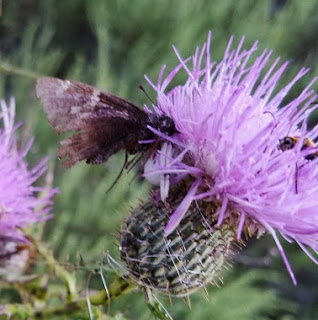 So I looked more closely.  Sure enough, there, under the skipper, barely distinguishable from the thistle, was the round belly and two legs of a crab spider. 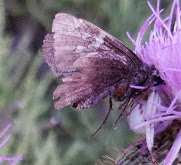 I had seen this kind of spider before--long front legs, abdomen like a white bowling ball with splotches of color--it was one of the crab spiders in the genus Misumena that blend in with flowers and wait for prey.

According to my Insects of Kansas book, some Misumena can change color to match the flower they're on.

This spider blended in so well with the thistle!

Here is a blow-up of the spider.  Those long front legs are pointed down, vertically, while thistle florets cross in front of the legs horizontally and diagonally.

The thistle offered food, in more ways than one.

That butterfly came to eat and stayed to be eaten. 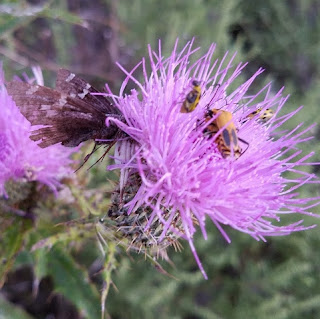 I took a final photo before I left and saw that a second Cucumber Beetle had shown up--just to keep the stories coming.

Posted by Margy Stewart at 4:50 PM No comments:

This August was so beautiful!


Though I have written about August 2016 in 3 previous posts, I am eager to share several other close encounters with the bottomland prairie.

The month started with a lovely "bloom" of  tiny White Spring Moths (Lomographa vestaliata) .
These radiantly-attired moths fluttered among the plums (one of their larval food plants) in great numbers, but just for one day, August 4, 2016.   During the next two days their numbers dwindled down to nothing.

For that brief moment, they were a dazzling presence!

You can see how very small the White Spring Moth is, relative to the plum leaf she's sitting on.


When I saw the angelic Geometrid Emerald Moth (family Geometrinae) later in the month, resting on a thistle stem, I thought it resembled the White Spring Moth except for the horizontal ridges across the wings.   Eva Zurek and bugguide.net identified the family for me.   I learned there is more than one species of moth robed in white lace & satin!


Near the old stone barn on the Oak Road I made the acquaintance of Underwing Moths (Catocala spp.)  They are not easy to identify down to species.  That's a shame, because the species names are intriguing--"Beloved Underwing,"  "Oldwife Underwing," "Tearful Underwing," & "Darling Underwing."  The names make me think there is quite an on-going story starring Underwings.  I can't just jump in and be a part of it.  I will have to wait for more encounters to catch up and catch on.


In addition, I finally had the opportunity to meet in person the famous "Birddropping Moth!"   He's the one who knows how to look just like something nobody wants to eat.


Here is a video clip of Acontia aprica, aka "Exposed Birddropping Moth" (thank you, bugguide.net, for confirming the identification).  He appeared on a Giant Ragweed stem in the Creek Field.    His caterpillar food plants are in the Mallow family, such as Velvet Leaf Weed.  For better or worse, we have Velvet Leaf Weed!

But it wasn't just moths.    Other insects can have "blooms": 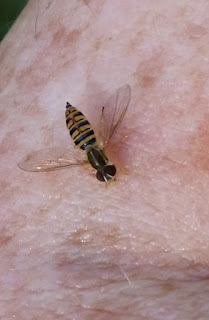 We had a "bloom" of hoverflies (Syrphidae) in August. (Friends in Wamego & Manhattan say the same: These sweet little flies appeared in yards and around houses and landed on people--gently, without biting).

The one pictured here, imbibing salt from my sweaty hand, is Toxomerus politus, and a female (thank you for the ID, bugguide.net!). 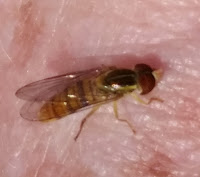 When they fold their wings lengthwise, they really do look like bees--it's hard to see for sure how many wings they have.

Their non-stinging nature and their habit of gently probing human skin make them delightful visitors--and welcome participants in the ecosystem, too. Their larvae are important consumers of aphids. In turn, pollen is crucial to hoverflies' production of eggs. We can help them by planting native plants. In turn, they will help us with pest control.


There was also a "bloom" in August of Eastern-tailed Blues, gorgeous little butterflies. McDowell Creek neighbors talked about them in their yards; people in town saw them around their houses. I found them both outside our back door and up on the prairietop, in native prairie. They moved so quickly the only way I could get a photo was to video them and then freeze a frame. Thank you to Dick Beeman for confirming the ID!

Then there were the things that appeared in the opposite of a "bloom," whatever that may be (striking few-ness?).  Not in profusion, but in paucity....


Disturbingly few in number in the Creek Field this year were the common weeds called Velvet Gaura, Gaura mollis.


These native annuals in the Primrose family usually volunteer prolifically along field edges and roadsides.     The Creek Field was jam-packed with them last year, especially the buffers, so there were lots of seeds.   But perhaps the burn on March 17 had damaged the seeds?


Could warm weather and rains have come at the wrong time for them?   They may have germinated too early and then suffered from dry spells and cold.


What few plants we had were full of the Stilt Bugs and Clouded Crimson Moth caterpillars that call Gaura mollis home.

Moving in the opposite direction (toward greater appearance) though still small in numbers, was Obedient Plant.

It was in our seed mix, recommended by prairie experts for bottomland prairie, and it bloomed last year for the first time.

What a thrill it was to see it again this year!

It is a plant in the mint family and can spread by rhizomes.

It had only one or two flower stalks last year; this year, there are at least eight.   Are they new plants or is the original plant just adding on?  Either way the footprint of this species, though still very small, is expanding.


I found this little grass blossom all by itself, no others like it.  It  confused me, with its bristles all on one side of the stem, like a Hairy Grama or a Blue Grama--two species that would be unlikely in a tall grass prairie wetland.   My friend Iralee pointed out that half of the inflorescence could have shattered, making this a maimed version of a foxtail--Setaria geniculata, she believed.


We have lots of exotic annual foxtails--so her suggestion that we could be hosting a native perennial foxtail was welcome news!

Its common name is Marsh Bristlegrass.  It likes moist places--a perfect fit for our Creek Field.  I was moved and impressed that this little guy had volunteered--located here, all on his own.   We'll see if he tells his friends!

So high tides and ebb tides washed over the Creek Field in August 2016.   There were bursts of plenty and lonely stands.

Each encounter was an opportunity to learn and connect.  Each was a door swinging open under a big sign that said, "Welcome Home!"


Posted by Margy Stewart at 4:12 PM No comments: